There's still only a small number of people who know about or have played MONSTERS OF KANJI. With the sequel being in development right now, I thought it would be a good time to take a look back at 2019. After all,  this was quite a special year for me. 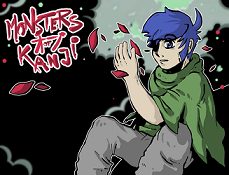 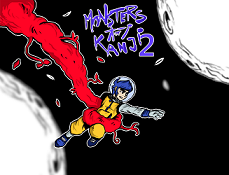 Sometime in February this year I went on Twitter after several years without any kind of social media account. I had already worked on MONSTERS OF KANJI for quite some time. But I never really took time to let people know about it. The reasons for that are stupid, but not that uncommon... 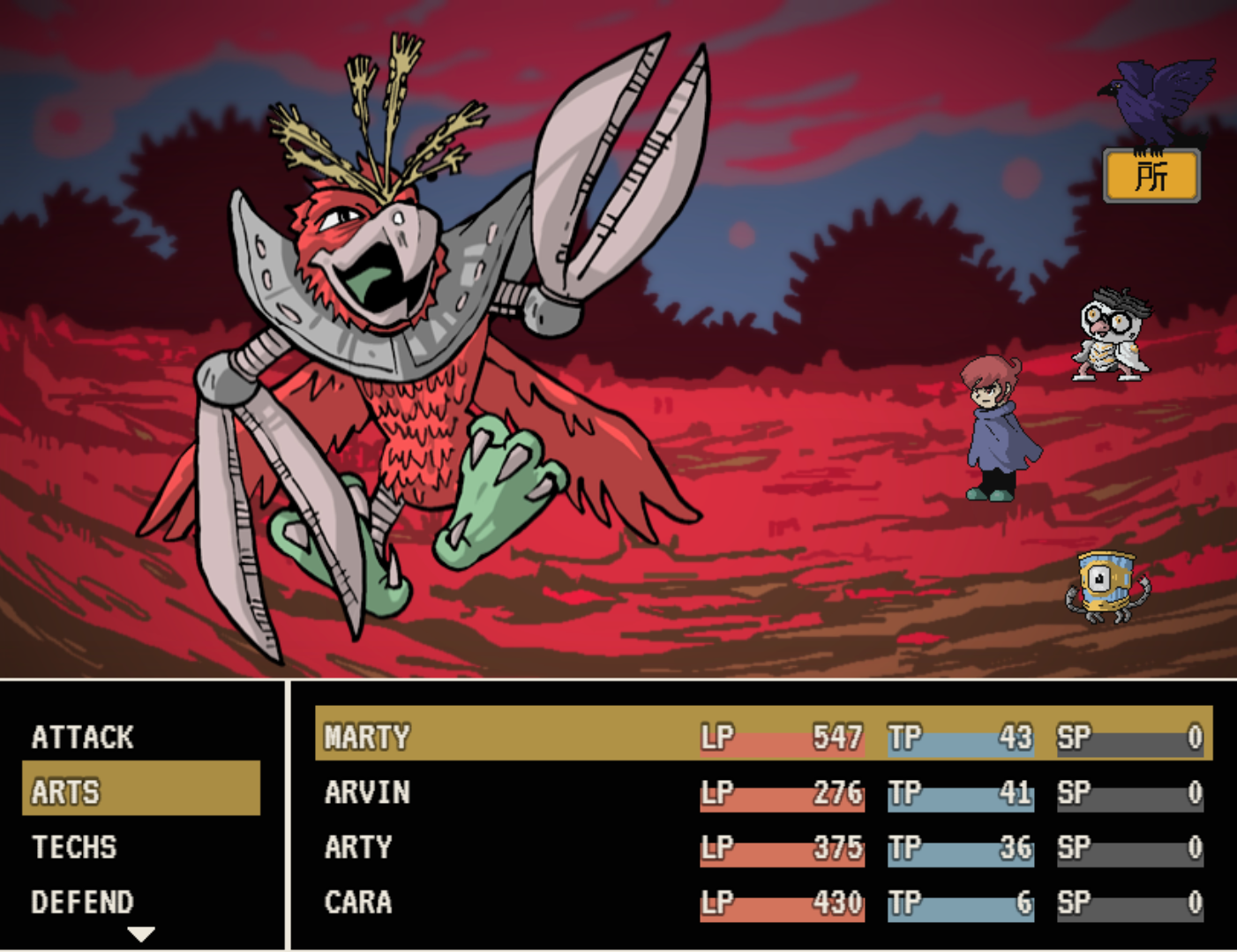 1. NO TIME!
I was too much in "the zone". No time for social media. Need to get this feature ready, need to improve that part of the game. Want to make the deadline I set for myself... Busy, busy, busy...will talk about it later.

2. HELLO, MY NAME IS...
I hate the prejudice that video game devs and players were some kind of antisocial subspecies. However, I personally have skipt more than a few parties to finish that new awesome game/book/tv show/... And interacting with strangers on social media platforms can be hard for me. Sometimes feel like I won't communicate at all, while other times I tend to be "too much". I'm always honoured when someone contacts me, asking stuff about my game, but it also makes me nervous. After all, there's a reason why people recommend staying away from social media if you've got trouble with anxiety.

3. LOOK, I MADE SOMETHING!
Lack of confidence in the product. I mean, there are days whenI just love what I've done here, but there are also those "other days". When suddenly everything you've ever made is just rubbish. I wanted the game to be in a representative state before showing it to someone. What I didn't know then: When you make a game it is always in a representative state - and there will simultaniously always be times where you feel like it isn't and won't ever be. 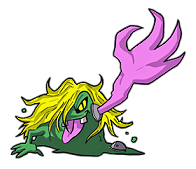 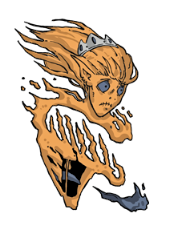 So in the end I set up the Twitter-account and started to post a few things about MONSTERS OF KANJI. At the time I was aiming for a spring 2019 release, but this turned out to be a bit risky. So I pushed the release date to June 14th (a very special day for me :)) and continued spending every bit of spare time with finishing up the game, hunting for bugs and typos, improving balance and script quality. Was a tough time, especially since I have a full time job that isn't exactly a cakewalk :) 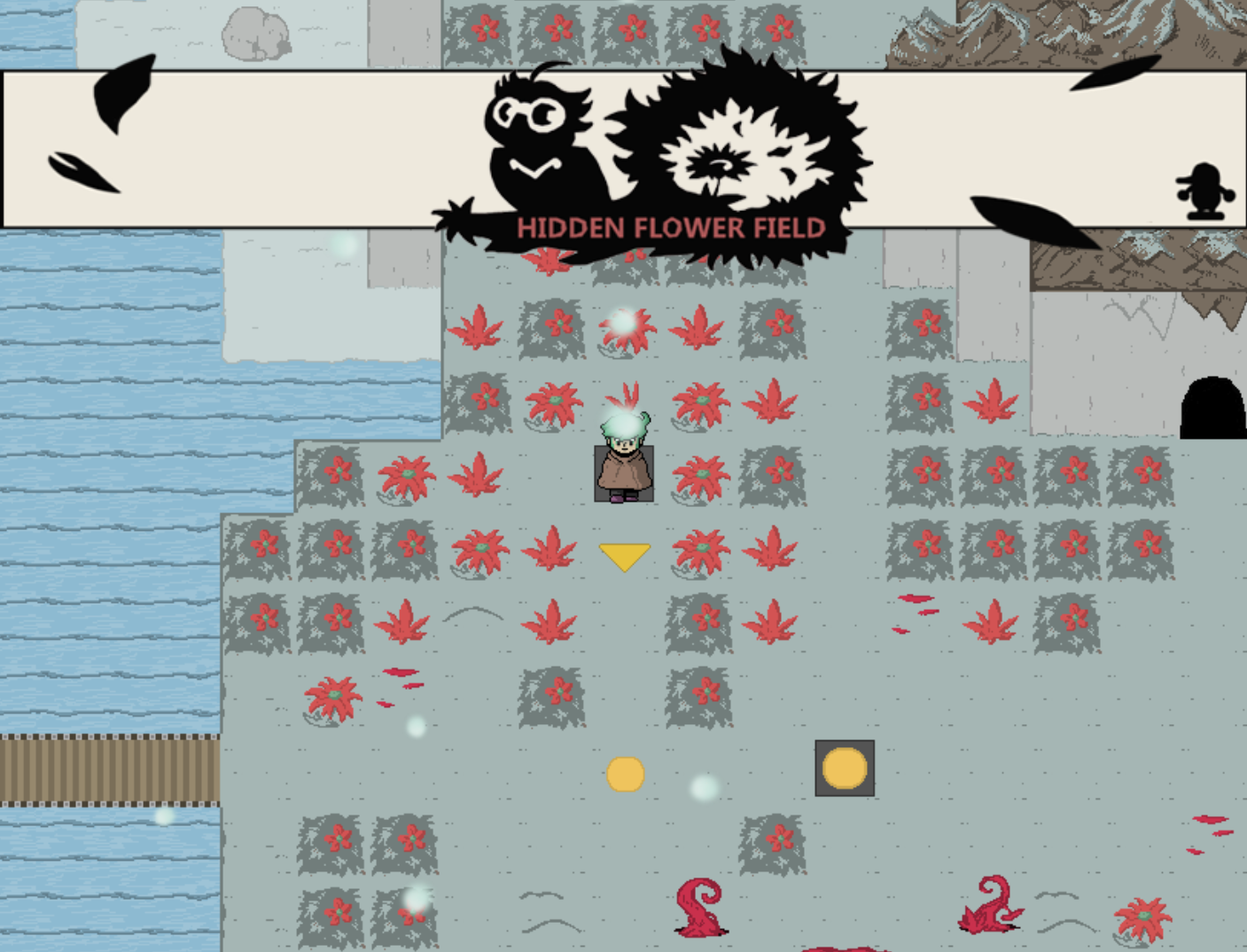 I started posting more and more on social media, but was still a little too shy for someone who wanted others to know about his project. Exchanged a few very nice messages with others, but didn't really follow up on it. I focused on finishing MONSTERS OF KANJI above all else. I had dreamed about making a big RPG ever since I first started working with RPGMaker (which was a long, long time ago). When June 14th started coming closer, I took some vacation to have enough time to get everything done. Didn't sleep a lot during the week before release and was very nervous when I hit "RELEASE APP". 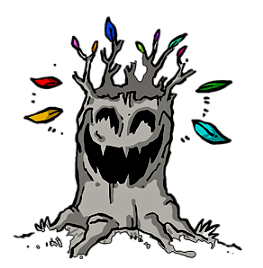 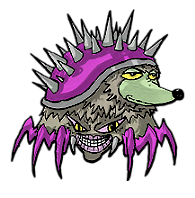 I wasn't able to sell a big amount of copies at launch, but the few people who did buy it meant the world to me. And among those were two players who really started digging deep into what MONSTERS OF KANJI has to offer. Even though I double and triple checked every corner of the game, those players managed to find some typos or small glitches - more than I care to admit... And especially one of them helped me with his feedback to improve MONSTERS OF KANJI a lot. If you're reading this: A special "Thank you" once more :)

To find players like this really is a blessing! And in a time where you're secondguessing everything about your work - having someone give you fair and honest feedback without raging can make all the difference. For the quality of your game and for your own state of mind :)

During that time I also got to know some people on Twitter a little better. And thanks to them, social media got a lot less scary :) 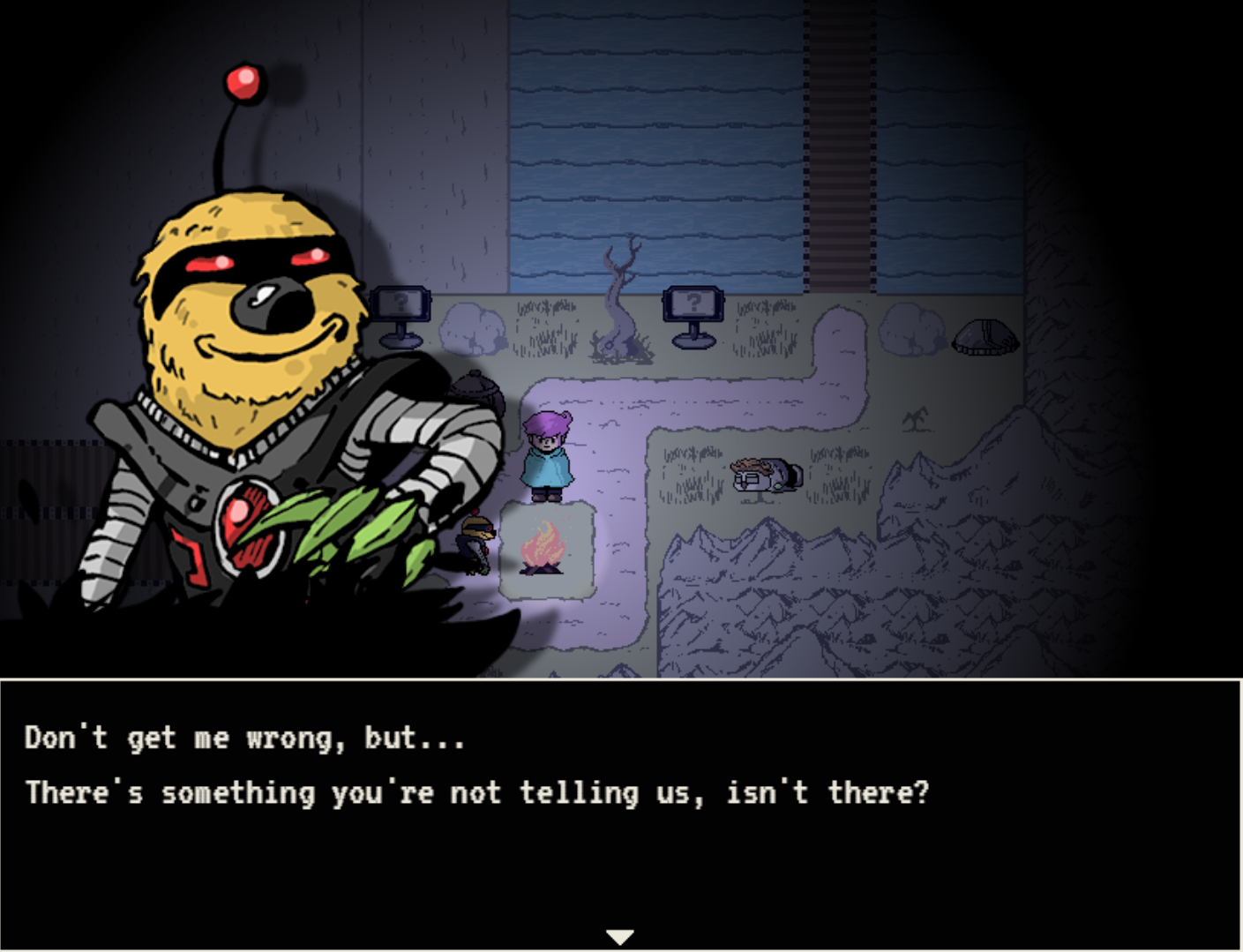 Letting go of the strain that was launching your very first solo-developed game was tough. Really needed to find a way out of the constant "TO-DO-state". There was just one problem: Around the halfway-mark of creating MONSTERS OF KANJI, it became clear to me that I wanted to make a sequel. There was more to the story that I needed to tell. Also, I started dreaming about taking my characters to space :) And the game's concept really suited some kind of monster-collecting game. And that's something I always wanted to make, as well. So while I was still working on post-launch support of MONSTERS OF KANJI, I decided to announce MONSTERS OF KANJI 2. This was met with a lot of interest which made me quite happy. But I really, really needed to take a break. 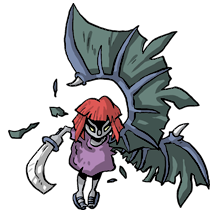 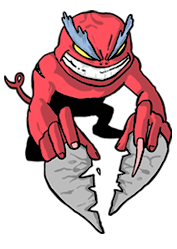 So after the release of the 1.2 version of MOK, I decided to take a step back from setting up deadlines, making trailers and properly promoting any of the two games. MONSTERS OF KANJI 2 is supposed to be a labor of love, and if I don't start to relax, I fear it would show. I still work hard on it, but not as obsessively hard as I did with the first one. . The same goes for Twitter. I'm still online regularly, just not several times a day. Luckily, because of all of the awesome people I met online, I still enjoy sharing new stuff about the development. Somehow it's still PR, but it doesn't feel like that anymore. And the projects of others inspire me so much, I sometimes forget that my account is supposed to be about MONSTERS OF KANJI :) 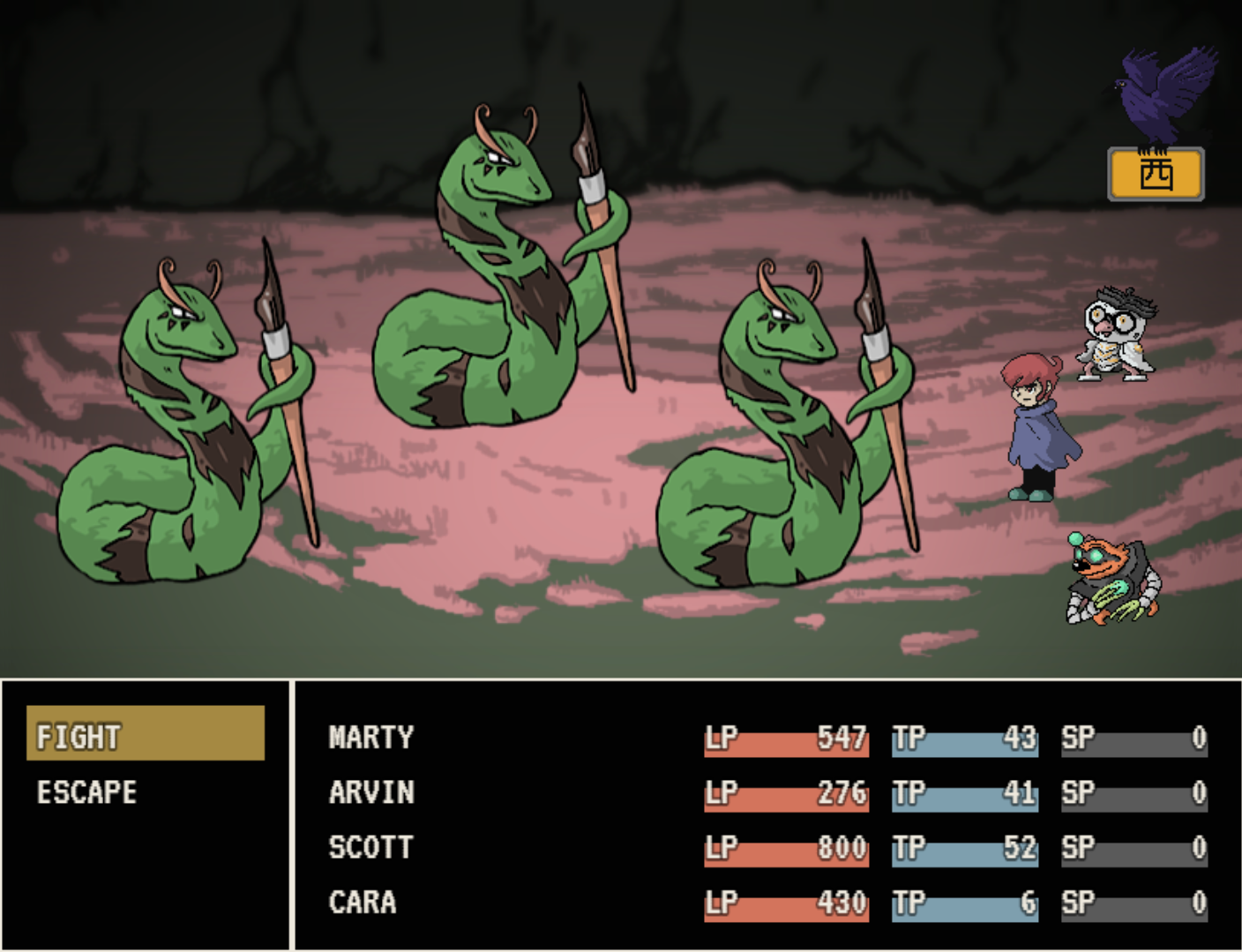 Now the intersting stuff - the current state of MONSTERS OF KANJI 2:

That Twitter-account I was talking about, it's this one:

Feel free to write me and ask me anything. However, as I said, I'm not as active on Twitter as I used to be. So please don't worry if it takes a couple of days before I can respond. 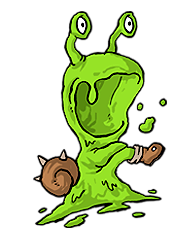 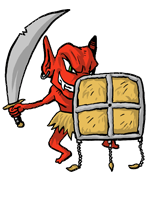 MONSTERS OF KANJI 2 is making pretty decent progress. And I've got big plans for it :)

Right now I have a functioning SPACE MAP. Here you'll eventually be able to unlock and explore 5 out of 8 planets in whatever order you like. Each planet comes with a suit upgrade that will allow MARTY to climb, destroy walls, swim,... This opens up new areas on other planets. New areas mean new monsters, collectables...stuff. 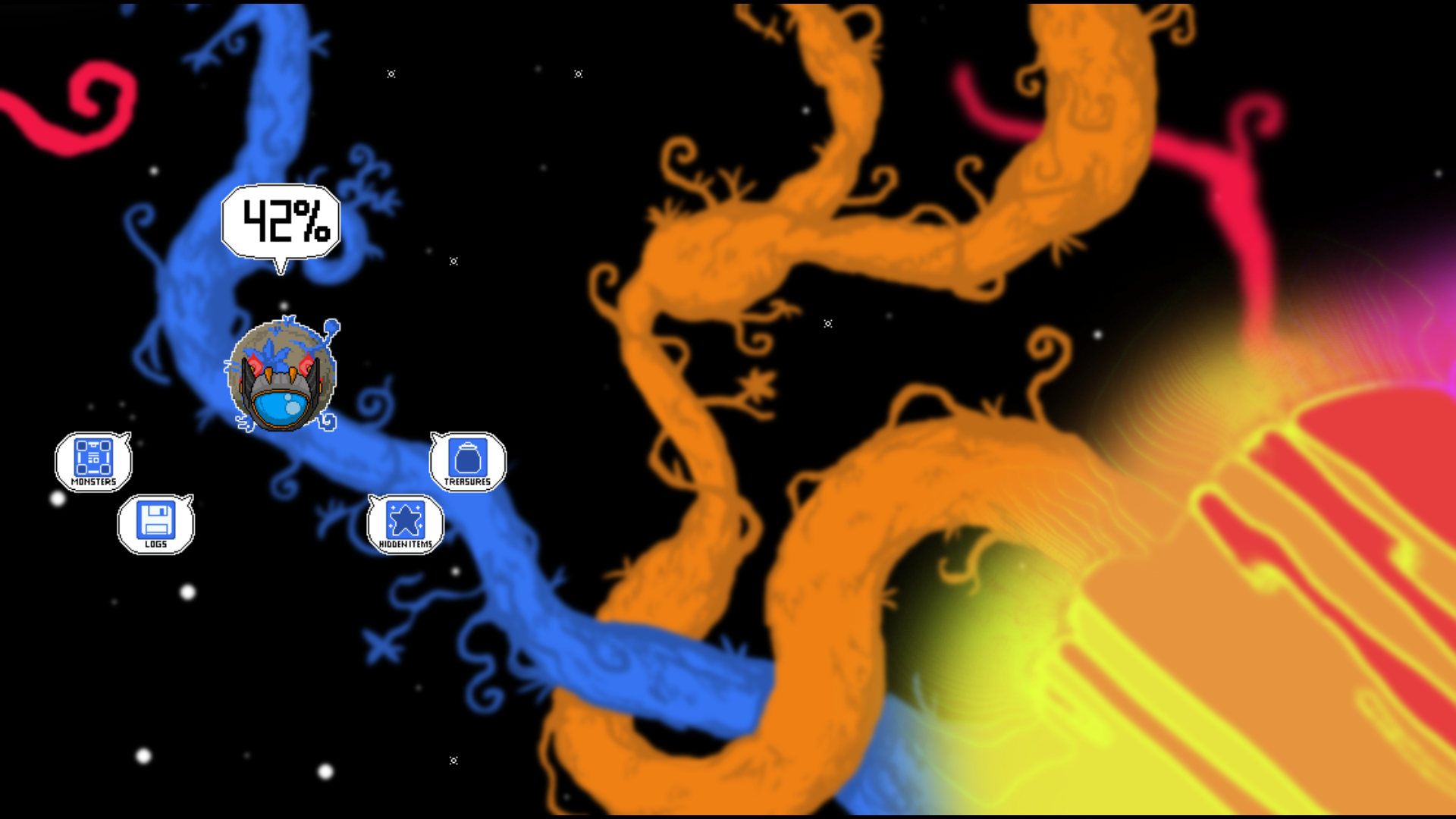 The game features 151 playable characters. Marty and 150 monsters that can be unlocked by scanning them in battle. Via the MONSTER MENU you can choose which one you want to add to your party. Here you can also look at kanji data, vocabulary and the skill list for each monster. 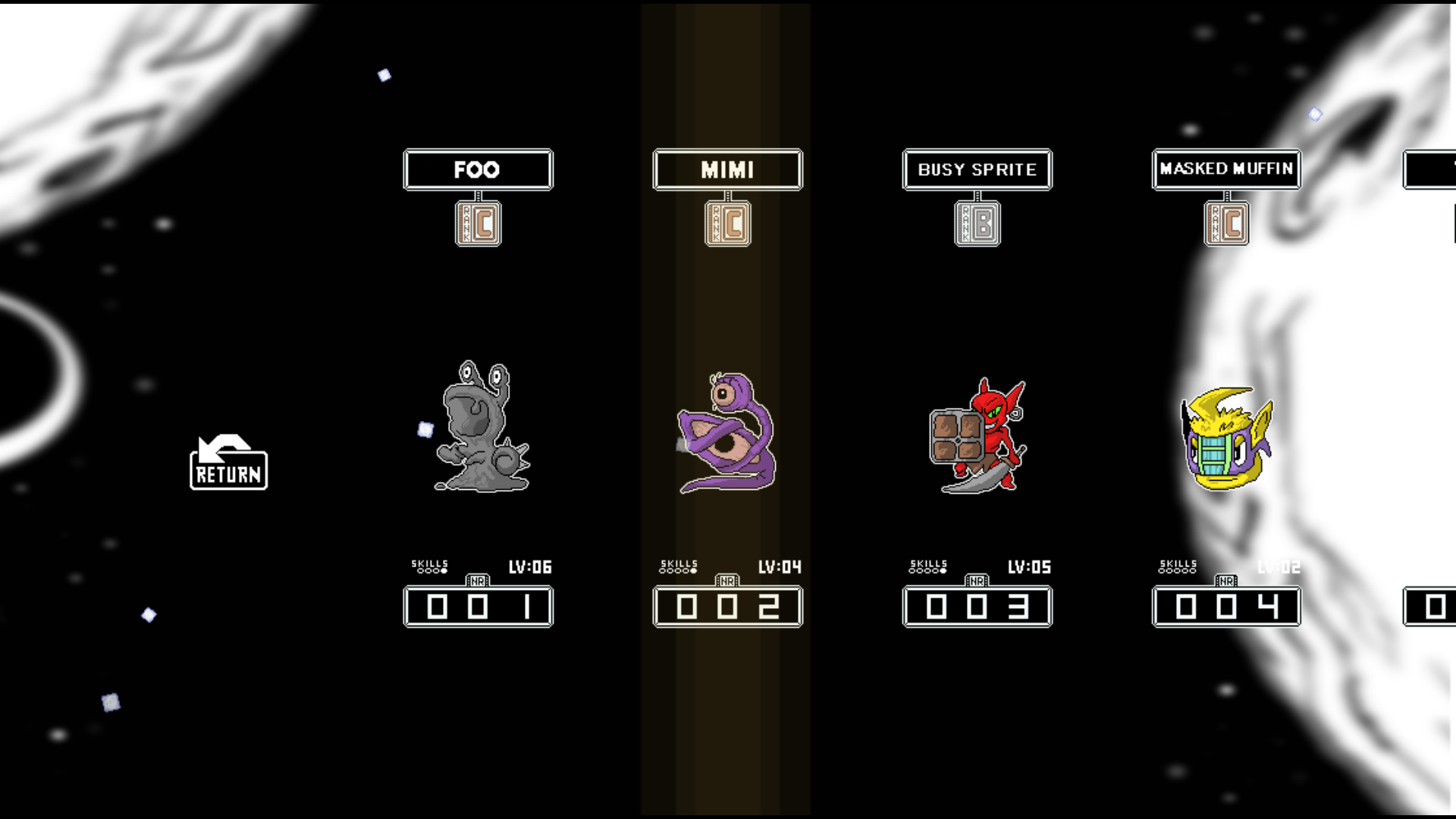 The first planet is called U'FORRIA. It acts as the tutorial and is pretty much done. There are a bunch of spots that you can't explore at the beginning of the game now, but once you return with the right gear, you will be able to discover a hidden forest, several secret caves and a special miniboss. U'FORRIA is the smallest of the 8 planets. 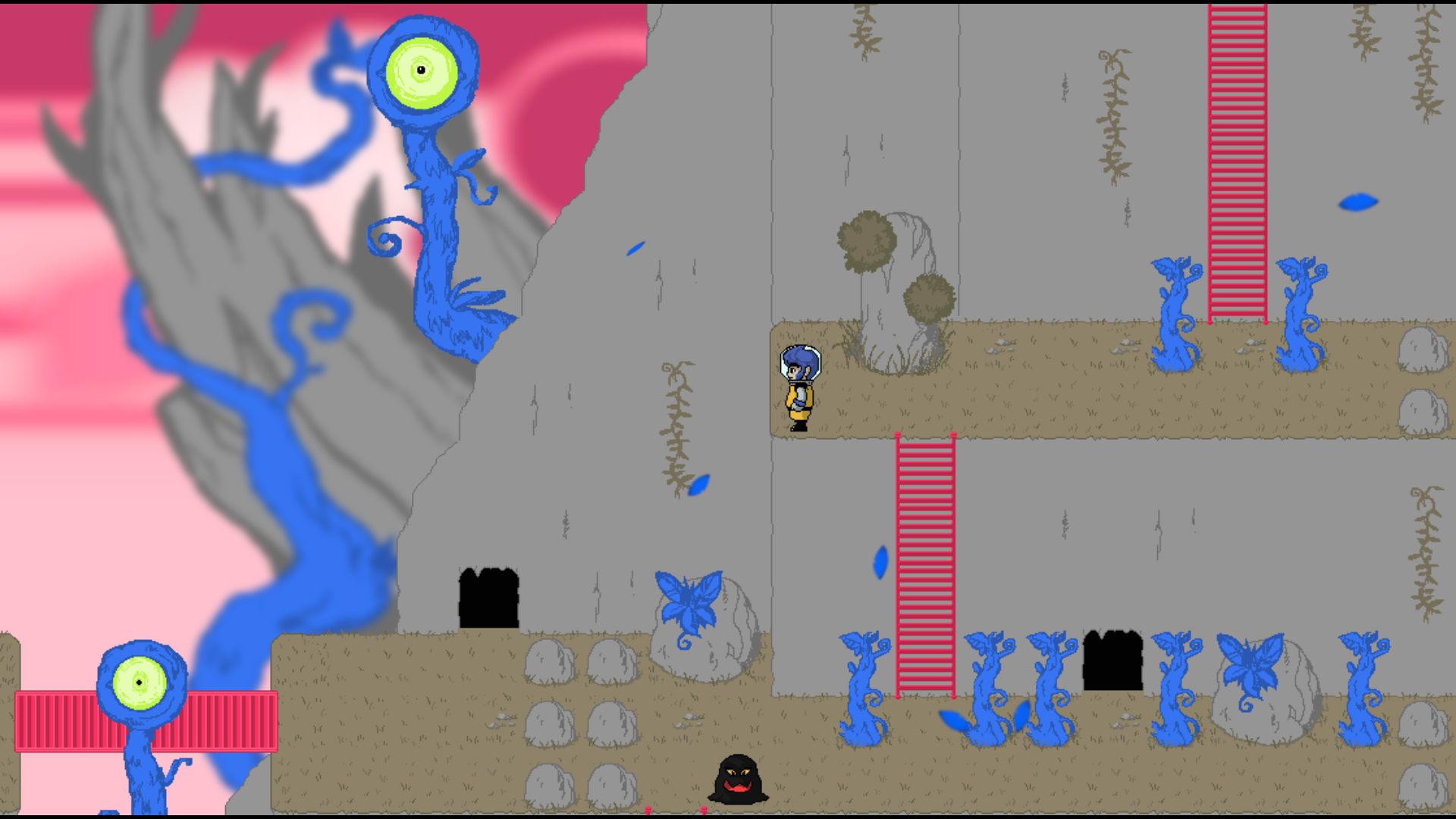 The story starts several years after MONSTERS OF KANJI. You will find out what happened during those years and you will get some kind of recap by finding LOG FILES in the hub area. For those who have played the first game: It's like the MEM.DATs - only this time every area of the game has its own set.

The story is supposed to be understandable and enjoyable for anyone. However, players of MONSTERS OF KANJI will definitely get more out of it. 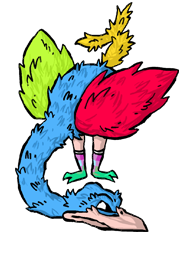 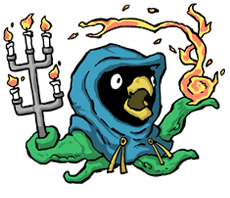 When you're not exploring the planets and getting closer to MARTY's ultimate goal, you can spend time at the game's HUB SATELLITE. Here you can change your space ship's skin, turn on special battle themes, change classes for MARTY, upgrade the MECH MARKET, earn in-game-achievements, read tutorials and visit an old friend... 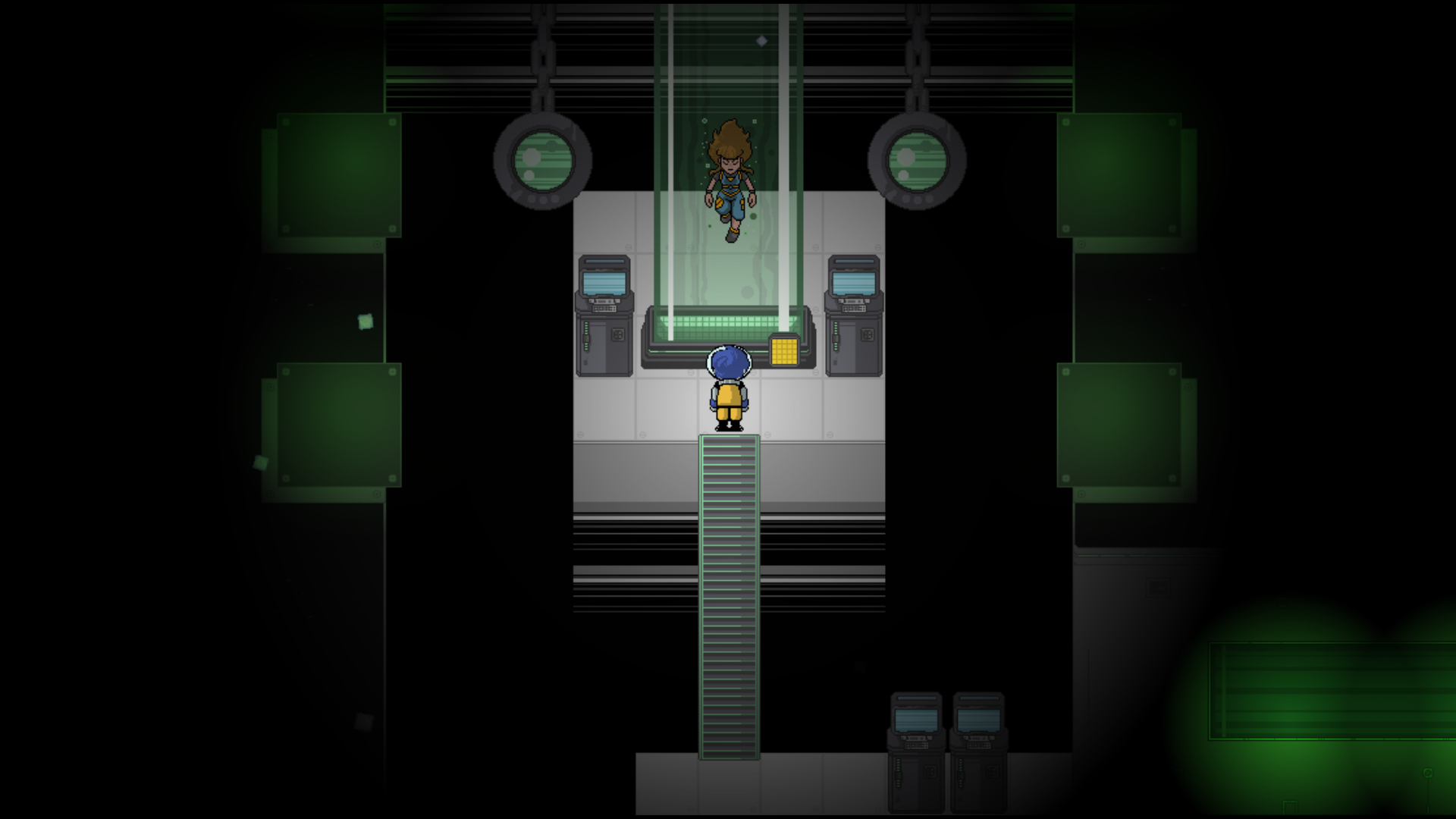 There's still more but I'm going to wait till next year before revealing some of the new features and characters. Rest asured, I'm doing my best to improve on every aspect of the original MONSTERS OF KANJI. 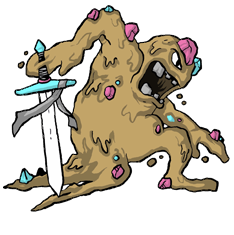 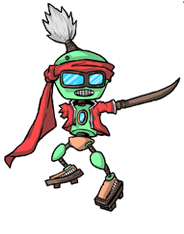 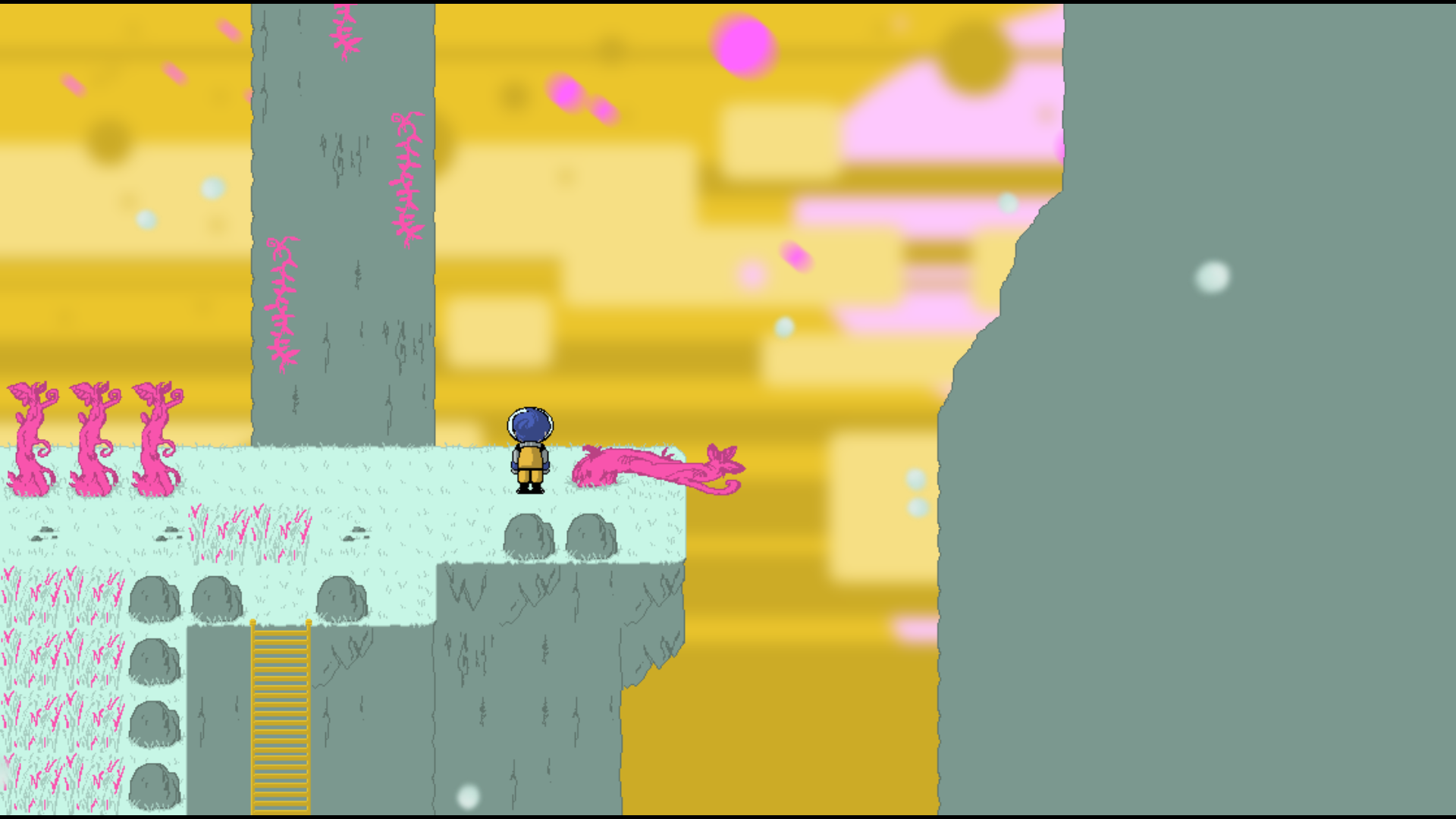 To cap off this looong Devlog, I really want to thank all of my test players. and family members! Your feedback was super helpful, no matter how far into the game each of you made it :) Thanks for listening to me endlessly blabbering about the game, for keeping me on the ground when neccessary, for watching story scenes unfold. Again and again and again :) I always say I developed this game on my own, but you never really do! <3

Speaking of "solo developed": Thanks to the amazing plugin-creators that spent a huge amount of time to develop plugins while also giving advice and generally supporting the RPGMaker community. There are just so many aspects of my game that would have been a lot more stiff, if it weren't for your work!

Also a big Thank you to all the great people I got to meet on Twitter. With that I mean followers who tweet and retweet or just take the time to look at the stuff I'm posting there. Your feedback is always welcome :) There's also a bunch of other Indiedevs, composers and streamers that keep impressing me :) Their amazing projects as well as their huge amount of support for others... You've helped me out a lot and you inspire me constantly! There's even one among you without whom I never would have seen the ending of STAR FORCE 1 and 2! 2020 might be the year to finish the trilogy :) Thank you so much!

Last but not least: Every single player of MONSTERS OF KANJI. Whether you liked it or didn't, whether you spent 100 hours with it or 2 minutes. Wether you 're interested in the sequel or not: Thank you so much for checking out my game. Get Monsters of Kanji

Help Marty save his world by understanding it.